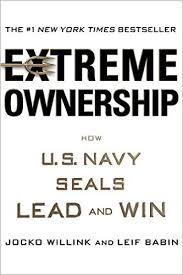 Lots of books about leadership have been written by academics of the field.  Others still by retired business executives with impressive resumes indicating they were good leaders.  But this is the first Leadership book I’ve read by authors whose decisions were literally life and death.  The authors, Jocko Willink and Leif Babin, were the officers commanding the SEAL platoon that included sniper Chris Kyle of American Sniper fame.  They now run a highly successful Leadership Development consulting firm.  Their bona-fides to write this book are pretty darn good.

Extreme Ownership applies military concepts to the business world.  Each concept is explained in detail.  Next, an example of its application in actual battles in Iraq is discussed.  Finally a true example of the concept in a business setting is discussed.  It’s a strong learning technique.

The overriding theme of the book is that Leadership should be found at EVERY level of an organization.  A culture where everyone up and down the chain of commend takes complete ownership is the cornerstone of superior performance.  If your team is not performing at a high level, who owns the problem?  You do!  You hired the team, trained the team, and lead the team.  But your team should also own the problem!  They should own the fact that they didn’t provide feedback, and didn’t drill hard enough to ensure that they could perform at a higher level.

One of the best examples in the book is a story from BUDS, the SEAL’s training program near San Diego.  The leader of a raft team that had been consistently finishing last in races complained to the instructors that he had a bad team.  They wouldn’t try harder and pull together as a team.  The instructors swapped him out with the leader of the raft team that had been winning virtually every race.

You guessed it; his “bad team” won the very next race.  But the story doesn’t end there.  The weak leader’s new team, which had been winning almost every race came in second.  Why did this happen?  Because their former leader had instilled a culture of extreme ownership in the team.  In essence, they carried their weak leader to a second place finish.

A great read.  See on Amazon.

Want to join the discussion?
Feel free to contribute! Hire for Talent, not Resume Love the Ones You’re With
Scroll to top